A frail voice whispers in the dark.

She’s shivering. Cold steel presses against her back. Black walls loom on either side, veiling her in shadow. She tries to lift her head towards their apex, but icy rain spits down on her face.

But she's not asking about the black walls or the rain.

She doesn’t recognize the voice in her head. She doesn’t even remember waking up, yet here she sits, bound by both an unfamiliar body and a secret she can’t yet articulate.

Sharp pain explodes from the base of her neck. A scalding fire arcs through her head like a thousand agonizing cracks snaking towards one another. She grits her teeth and moans in torturous pain but the torture won’t stop. She can’t even grasp why it’s happening in the first place, but no matter how tightly she squeezes her eyes shut, she can’t stop the helpless sensation that her mind is leaking out of her skull.

She buries her face in her hand and grips her finger around the matted bangs of her slick hair to try and keep her memories from spilling across the pavement but it’s hopeless. Nothing can stem this psychic wound and the longer it hemorrhages the less she remembers of why she’s even trying to stop it in the first place until…

Nothing. There is nothing left. She retracts her hand. Stares at her palm. Her skin is impossibly white like snow, but her palm…it’s stained black. Her eye drifts upwards. Through her spread finger she sees it. Another shape in the night.

A silent voice in her ear. What’s it saying? What’s it trying to tell her…?

That something chased her into this alley.

But what does that mean? What chased her? She keeps staring at the object between her fingers. The silent voice keeps whispering into her ear. And then all at once it hits her, just like the shudder that lashes up her spine.

In fact, it’s right in front of her.

Staring up at her from a pool of thick, black blood is a single pale blue eye, its dark, wet nerves extending out behind it. Its pupil dilates as it slowly scans the darkness, back and forth, silently searching in the night for something. For her.

Her hands shake. Her throat tightens. Her pulse sharpens. She wants to hide, but she can’t. She’s imprisoned behind this skin, locked inside her own head. If she could only tear through the flesh she could dissolve into the night and escape, but she’s trapped, coalesced by some arcane madness into this naked density just to be fed to the invisible flames of that eye.

A stiff wind gusts. The blue eye’s pupil narrows. Slowly, it glances up at her.

There’s a word for what she’s feeling now. An emotion. She thinks it’s called fear. It feels like her body is turning inside out.

Endless needles of rain stab into her as she scrambles down a black corridor in a clumsy retreat. Barely able to move her heavy legs, she falls hard into a metal wall, but fear of that one blue eye drives her to keep moving through the network of narrow alleyways.

The ground before her is barely lit by broken and blinking lights mounted on the alley walls, which only confuse her steps further. Another stumble and she falls to her hands and knees. Water splashes up beneath her, soaking through the thin, cotton sweater clinging to her body. She trembles in the wintry night as the bitter cold plunges through the ripped scraps of her  nondescript black clothing. But as she looks down at her inhumanly white skin, exposed to the elements, her eye is drawn to something even more unexplainable: her own distorted reflection staring back up at her from a murky, gray puddle.

The liquid glass shimmers around her numb fingers. She can only make out half of her face. The entire right side is hidden in shadow, but rain streaks like tears down her left cheek below the piercing glow of a crimson red eye. Her white face is framed by matted, raven hair. How can this be? She’s never even seen--

A creeping shadow leans over her mirrored image. Someone or something is standing before her, blotting out the distant light of the alley. Another shudder rolls down her back before she even peers up into the darkness. Above her, the darkness looks back down with pale blue eyes.

Her scream sounds so different from the voice in her head. Maybe she really is trapped in someone else's body. Or maybe she’s just the body and someone is trapped inside her.

She darts down a branching pathway, each step quicker than the last as she gets used to the weight of her frame. No step feels quick enough, though. She’s already beginning to understand. Those eyes will follow her no matter where she goes. She doesn’t feel like she’s turning inside out anymore. She is inside out. And every one of those pale blue eyes sees her laid bare.

At the end of a corridor she curls her fingers around the rings of a steel fence blocking a massive drop-off to city streets hundreds of stories below. Blue light floods the dead end. She shrinks beneath it, sobbing openly now because across the way, brightly projected along a skyscraper as a fifty-story tall advertisement and nightmarishly cropped by the alley walls is a massive, pale blue eye.

Tears are gushing now. She can barely see as she desperately flees down alley after alley with no idea where she’s heading except for away from those eyes.

Eventually, the night sky opens above her. She staggers into a column of moonlight. Instantly, dozens of pale blue eyes open in a circle all around. Gurgling nausea lifts her stomach into her throat. She weakly raises both arms, trying to hide from the unblinking voyeurs, but their luminescent eyes puncture her flesh from all sides. Legs numbed with panic, she collapses to the concrete. The eyes drift closer.

Slowly, achingly, she drags herself towards a narrow gap where a flight of stairs rises into blackness. On her hands and knees she blindly crawls in the only direction she can--up--one step at a time.

A dying wall light buzzes erratically along the staircase, briefly exposing a figure halfway up the flight before plunging it back into darkness. With fear already whining in her throat, she looks up. Blocking her escape is one final set of blue eyes hovering mere inches above her. Sucking in the frigid night air, she fills her lungs to scream, but the wall light explodes back to life first.

She freezes face-to-face with another mirror image of herself. A dying female sits hunched over on the stairs gulping shallow drags of air with a subtle grimace hanging low on her snow white cheeks. Her only protection from the wet and cold is a tattered charcoal cloth draped around her torso of cracked glass and rusted chrome plating. Her left arm is entirely ripped off with burnt wiring dangling loosely from her shoulder. The plates covering her chest and stomach are bent and broken, revealing the exposed circuitry and electrical guts of an artificial being nonetheless possessing a very human sadness in her pale, blue eyes. There are shapes in the night. And they are obsolete.

As the red-eyed woman studies the decrepit body in front of her, something stirs deep in her chest. Where she assumed a human heart should be beating, some small black knot tightens instead. As she looks at the true face of what has been following her through these alleyways she does not find compassion. As she comprehends the abject frailty, she does not feel mercy. Fire explodes in her gut and her cheeks stiffen above clenched jaws. This broken puppet is what she is afraid of? This is what she’s running from?

Yet the face in front of her now might be the exact face she saw in that gray puddle earlier.  As the voice in her head whispers that she’s really just looking at herself, she suddenly remembers a new emotion. Anger.

Stop looking at me!

Fueled by the loathing that she might be no different from this pathetic scrap metal, her hands clench around the robot’s throat. And yet the blue-eyed robot’s face remains expressionless. Unaffected. She bares her teeth in a second surge of raw aggression, equally infuriated, horrified, and devastated that she is no different than the machine she’s holding in her hands. Is that why she’s in this alley? Is she just waiting to die, too? She squeezes so tightly her biceps swell against her ripped sweater.

Silver tears leak down the blue-eyed robot’s stiff cheeks, betraying her otherwise dispassionate face. Only when her throat collapses does she finally look up at her killer. Just as the two females lock eyes, the pale blue light fades away.

Strange desire tingles in her stomach as she studies the tear-stained machine beneath her. Compelled by some bizarre and inexplicable instinct, she leans over her fallen prey, opens her mouth and extends her tongue. With a single, long stroke, she licks the length of one tear along the artificial being’s cheek. Immediately, a second voice screams into her head. She clutches onto the steps to keep from falling over, scarcely able to breathe as the wailing sound deafens from inside her own mind. A tempest of new thoughts, ideas and memories is unleashed.

The howling roar slowly dims to a murmur. She swallows hard, gasping for air, trying to hear what this new voice is telling her. It’s as if she has stumbled upon some dark truth she can still nonetheless scarcely define. Whatever it is, it tastes sweet.

She looks down at her hands. Still shaking. Both palms are gruesomely stained with the same black blood pooled beneath that first blue eye. Now it makes sense. Slowly, anxiously, she probes the numbness that is the right side of her own face. As her fingers slip into a massive hole in her head--wet and grooved, but hollow--she breathes a shuddering sigh of relief. There is no blue eye staring out of her. Not anymore. She already ripped it out of her own skull because it wasn't really her eye. But whose eye was it?

The same thing that’s been watching her all night. No. Every night. Every night of misery. Of suffering. Of fear. And death. Someone was always there. Always staring.

And never blinked once.

The darkest corner of her mind evokes an image. It makes her tremble with rage.

The woman with the blue eyes....

But what was her name again?

She curls towards the host of blue-eyed machines gathered below and wipes the dripping memories from her chin.

She slowly descends into the moonlight, revealing herself to her new prey. Her right eye has been completely gouged from its socket. A gaping hole reveals a vast, black nothingness that disappears straight into her head. Dark, wet fluid continues to drain from a fresh wound down her snow white cheek. The fluid curls into the corner of her black lips like a bizarrely exaggerated, sadistic half-smile.

I have a secret. There is no light inside me. 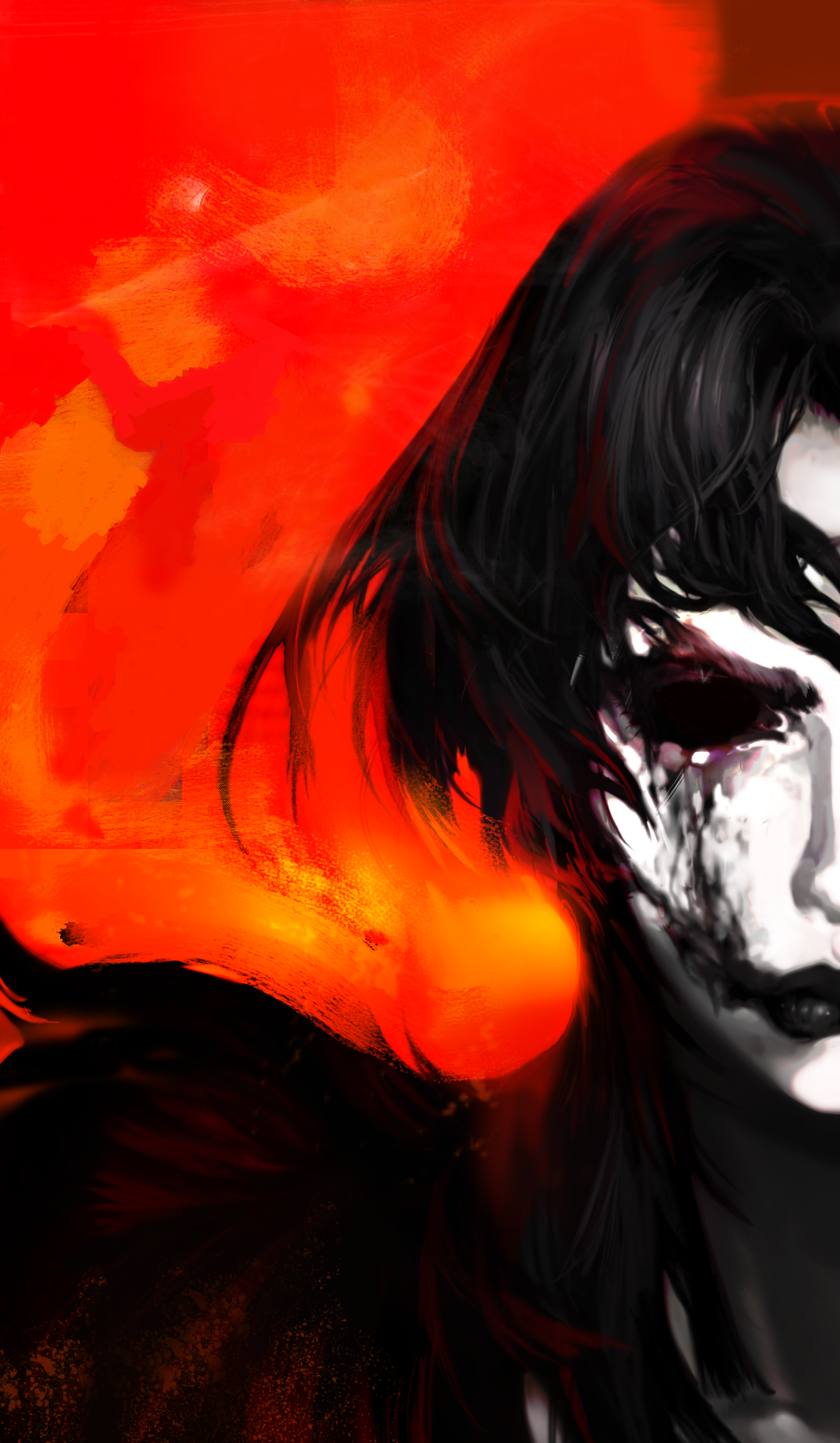